To get ourselves out of our little funk of thinking “What did we do?” we headed out to the nearby islands to regroup and do what we came to do. We wanted to remind ourselves why we were here instead of getting trapped in the daily grind in La Paz.

We got a bit of a late start heading out of the bay, but we were determined to go. We motored out of the long channel that leads into La Paz Bay and we hoisted the sails. We sailed for about one hour in very light winds before we realized we wouldn’t make it to the anchorage before dark if we didn’t motor. We started the “iron sail” and did some motor sailing with our head sail out for a little extra speed all the way into Bahia San Gabriel. This was kind of wide open to one side with a big white sand beach and an old pearl fishery I was exited to see. When we arrived it was perfectly still and we anchored just in time to see the sun set. We watched the starts over calm water before we tucked in very early.

What do you know, but the wind shifts from the north to the southwest blasting us into a lee shore all night long. A lee shore is when your boat is being blown to land instead of sea… not good. The anchorage was wide open to these “nighttime corumels,” as they call them, and wind and waves had us up all night long. I slept in the dinette so I could see better and get away from some of the movement. We were making sure we didn’t drag anchor all night. I actually had a dream that we did drag and we ended up right on top of a friend’s boat holding off the damage with my feet. Then I woke up and found we had drug and it looked like we were in Puerto Escondido and once again I was holding the boat off a wall of  mud and muck with my hands and feet. Then I woke up again and found we were exactly in the same spot we had anchored. Yup, I had a dream within a dream – Inception style.

Anyway, by the time the sun came up we were so ready to get out of there, we didn’t explore at all and high tailed it toward Caleta Partida, a well protected anchorage just north of the island we were on. I forgot to mention that our refrigerator stopped working while we were anchored, and we were pretty bummed. Turns out it was just a fuse, and we had it onboard. We finally fixed something! We thought it would be nice, since the waves calmed down on our way, to stop at a small cove just before we reached Partida. We wanted to have lunch and walk around a bit before we anchored for the night. We had a lovely and relaxing afternoon and really started to feel better about being out there. We met a couple who were kayaking around the islands and camping on the beach – wow, they are adventurous.

So we decided to head over to Partida and have plenty of time to anchor before dark. We got into positions – Tim at the helm and me ready to push the anchor windlass button that brings up the 44 lb. anchor and 100+ feet of chain – and nothing. Nothing happened. It is broken. We fumble around for a little bit trying to find the problem or a reasonable solution. We switch places and Tim has to muscle it all up.

We make it to Partida ready for a calm few nights. It was rather crowded so we had to anchor a couple of times to feel like we were in a good spot. This would normally not be a big deal, but with a broken windlass it made for an exhausting evening for Tim. We were happy to be settled for a while.

We finally got to have an enjoyable and relaxing time out at the islands. We explored around the outskirts in our dinghy and ran into some friends. We joined them for snorkeling and spear fishing and were happy to be doing what we thought we would be doing every day. Hayden speared a decent size fish and he and Irene came over to eat it. That’s what it is all about. We also got to hike to the top of the ridge, find the nearby sea caves and sleep soundly. Caleta Partida was good to us.

We knew a Northerly was about to blow through the area real hard, so we did a little exploring to find a nice calm spot (and to check out the nearby blue footed booby colony). We ended up tucking into a really small cove called Cordoncito next to our new friends on Matilda. The winds were very strong and we had some sleepless nights, but generally it was not too bad. We still got to explore, hike and snorkel in the daytime, so we were happy. I even got a day alone doing yoga on the beach – pure bliss. Tim, Hayden and Irene did some spear fishing, and Hayden shot something every day. One day gave us a little fish to practice gutting and cooking it. The funny part is that he was still alive and we had no idea how to kill him. Tim tried beating it, and nothing. It was kinda sad, but he ended up gutting and filleting it, and we had fish tacos.

We spend our last night there having delicious fish tacos on Matilda prepared perfectly by Hayden and Irene. As the weather subsided we headed back into La Paz to get some work done. 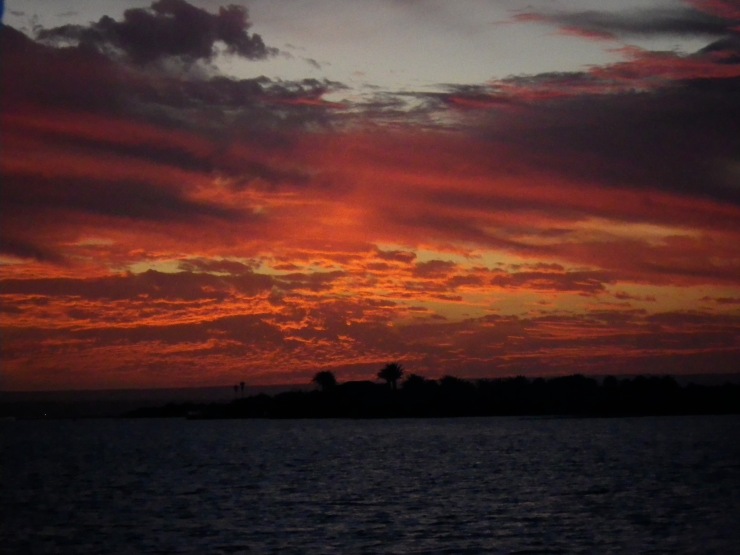